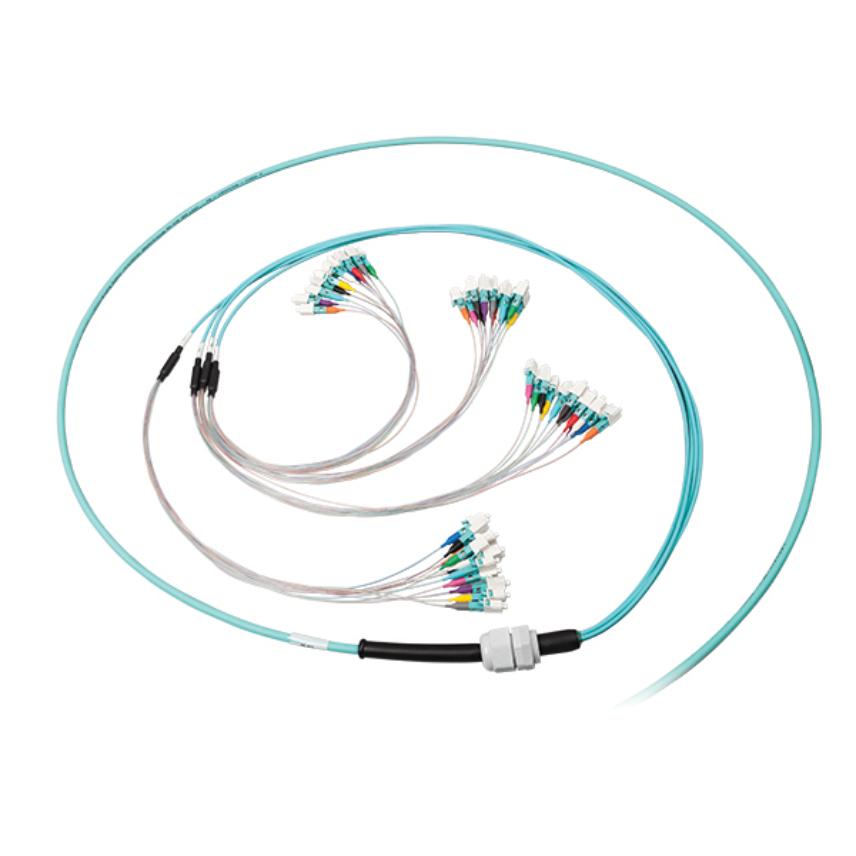 The assembly consists of a Micro-Bundle Universal Bca cable terminated with LC connectors on each side in a factory.

Pre-Term for data centres, buildings and campus based on Micro-Bundle Universal

The cable has a small diameter and bend raduis to meet data centre requirements.

The cable is watertight and rodent retardant due to the glass yarns.  It can be used in buldings and between buildings.

The cables have been tested for fire performance according to the new Construction Product Regulation: EN50575:2014 +A1:2016.

According to this standard the cables have a very high fire performance with minimal fire load and spread, smoke density, droplets and acidity: Cca.

The Declaration Of Performance for these cables can be found under fibre cables and the corresponding cable for fibre count and fibre type in the section “Micro-Bundle Universal Cca”.

The Pre-Term has a dual stage fan-out design.

The first fan-out point is between the cable and the legs of the fan-out. Each leg of the fan-out contains 1 Micro-Bundle with 12 fibres inside. This fan-out has been reinforced with aramid yarns.

The Tight Buffered fibres of the Pre-Term are easy to arrange inside a ENSPACE module since they are at the same time flexible and robust enough to handle.

The connectors on the Tight Buffered fibres have coloured boots for identification in compliance with the TIA/EIA standard. In manufacturing a fibre pair flip has been implemented.  When installing the connectors inside the ENSPACE modules the coloured boots need to match the colours of the integrated strip inside the ENSPACE module to obtain transmit-receive polarity in the channel.

The fan-out is protected with a bubble foam for protection during transport and installation. Every bundle of 12 connectors has an additional individual protection to avoid mixing them up with other connectors.

A pulling eye system is positioned at one side of the Pre-Term to facilitate the installation. This pulling eye is connected to the internal strength element of the cable. The maximum pulling force on the pulling eye is 450N.

All LANmark-OF Pre-term assemblies are fully terminated and tested in a quality assured factory environment.